When a conference is called a celebration you know there is something else going on.  I was fortunate enough to go to Disney Social Media Moms last year, and this year I went again, but this time to Disneyland in California.  And, since the celebration coordinated perfectly with my daughters’ spring break and Passover we decided to make it a real family trip and stay in Los Angeles to have our seder with all of our family that lives there.  It was Kismet.

I love Disneyland.  I love its charm, its uncomplicated, easy to cover size, and most of all its history.  I believe you can feel Walt Disney’s optimism and desire to build something really special when you’re there.  I hadn’t been to Disneyland since my daughters were 4 years old (8 years ago!)

And I’m happy to say, my daughters still loved it, even as jaded tweens.

One of the things I love about this conference is that they don’t tell you the full agenda and all of the surprises that are in store while you’re there.  And, they include so many different facets of Disney – so there are always unexpected and interesting people and initiatives worth learning about.

Here are my Top 5 Takeaways from this year’s Celebration:

1.  Cars Land is spectacular.  No, really.  Ever wonder what it would be like to step inside an animated film?  Well, this is pretty much as close as you will ever come.  I recommend going at night when the full neon glory of Cars Land is lit up and you can be immersed in the 1950’s vibe.  The Radiator Springs ride is crazy fun – and the backdrop landscape of Route 66 is genius. 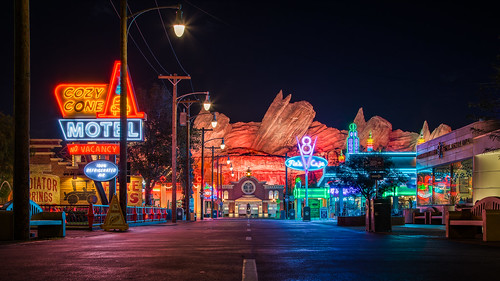 2.  It’s not the size of the castle that matters…

“Small castles are nice too.” My daughter’s response to Sleeping Beauty’s Castle at @disneyland #disneysmmoms pic.twitter.com/LKKjQm2Atl

3. It’s the character of the princess

One of the movies I am most excited about this year is Maleficent – and we got an extra dose of maniacal fabulosity at the celebration – and an extra dose of sweet from Sleeping Beauty herself, Elle Fanning.  She is as adorable as she looks…

There is also royalty of a different kind – a CEO who built a business from scratch and is now using her success for empowering students and teachers.

Let’s bring sparkle and magic into the classroom – @chiefexecbear talking about empowering teachers and students. #DisneySMMoms

That’s Chief Exec Bear, Maxine Clark, founder of Build a Bear Workshop, who spoke to us about teachers – good and bad – and the impact they have on children’s lives.  Hearing from incredibly successful women entrepreneurs is always inspiring, but there’s an even stronger impact when it’s someone like Maxine Clark who is also honest and supportive of other women entrepreneurs.  And I love that she started Build a Bear with an underlying belief that every child should be able to buy a basic bear and fill it with love.

4.  There is magic, everywhere you look.

Like this unexpected surprise in the headboard at the Disneyland Resort

“Creativity is not one person’s job… It’s everyone’s job!” – @Gary_Jerry at #DisneySMMoms. pic.twitter.com/zupuwgkCog

When you spend time with the people at Disney you quickly come to realize how incredibly talented everyone who works at Disney is, and how diverse those talents are. But, more importantly is this belief that every cast member has a creative spark that can be brought out.

One of my favorite videos to illustrate that is this one of the janitorial team making art with water:

These things are why this is not a conference, but a celebration.  A celebration of magic, family and inspiration with a big dose of serious fun.  And most importantly for those of us that write, or film, or share our stories, is this quote from Walt Disney…